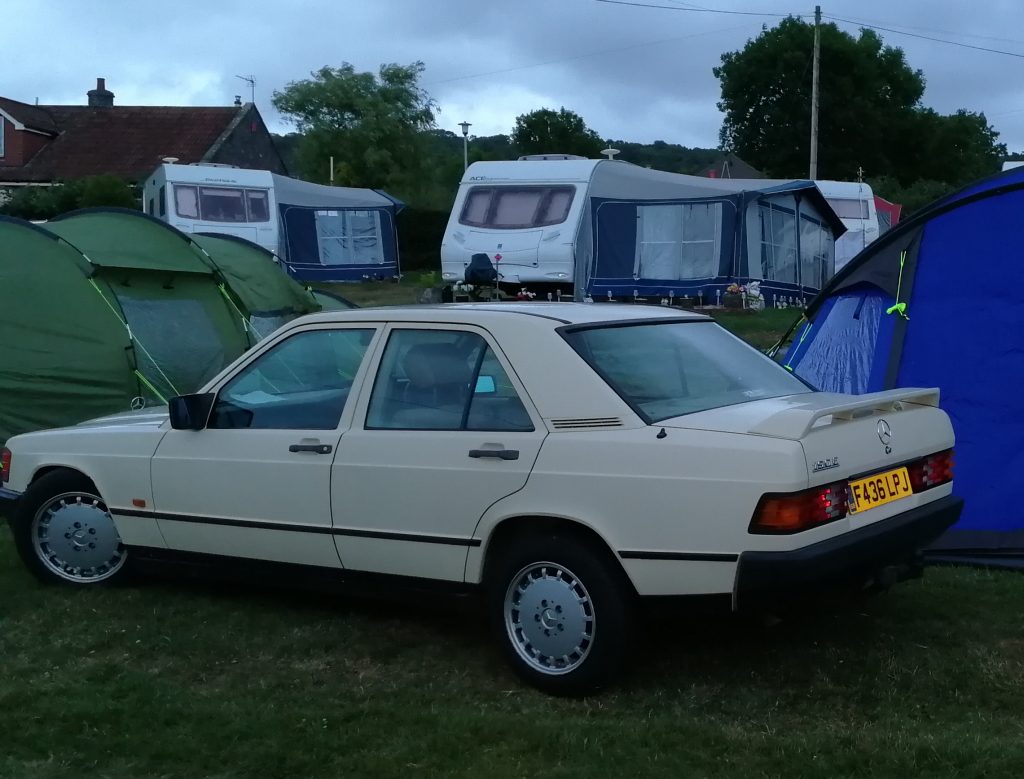 This car, a 1988 Mercedes 190e, was bought for the cheap car challenge that the Black Country Classic Car Club staged in June 2018. The original premise was to do a Top Gear like event but ended up as a week long camping tour in cars that were at least 20 years old and cost no more than £1000.

I originally purchased (via eBay) a 1997 Volvo V40 for this but it failed the MOT in February 2018 on emissions, a dodgy headlight bulb, and some brake related items. When I looked through the paper work I could see a new catalytic convertor and new Lambda sensor had been installed 2 years prior to the MOT failure; I realised that I could end up throwing money at the car and not even be sure of fixing what was potentially a major engine issue. I therefore scrapped the car for about £100 less than I’d paid for it.

Back onto ebay, autotrader etc looking for another car I found this tatty looking Mercedes 190e on eBay. The seller was upfront about some stuff that wasn’t working including the rev counter, temperature gauge, and the rear electric windows and that were was some rust on the wings and the bonnet but said that it was essentially sound so I figured what the hell, lets go for it. I ended up winning the auction for the grand sum of £575.  As the car was in Weymouth, we treated collection day as a family day out. We headed down to the South Coast in the family car, met the seller, handed over some cash, signed the V5 and the Mercedes was mine. I taxed it online after having insured it the day before, and we headed to the beach for the afternoon before driving back home in a 2 car convoy 🙂

The car then sat outside the house for a while until I started looking at getting the gauges working properly. A new instrument cluster (included in the eBay sale) made no difference so I started tracing cables and checking sensors, eventually tracking the problem down to a multi connector not being plugged into the fuse box correctly (nice cheap fix there). It was during the investigation that I was really glad we’d not had any holdups on the journey home, the loose connector also stopped the cooling fan from running and without a temperature gauge to warn me the first I’d had known about overheating would probably have been a cloud of steam coming out from under the bonnet!!

I decided that as a couple of the tyres were on the legal limit and the others were mixed budget brands I’d just put 4 new tyres on it and get the alignment checked. Tyres on, and the car gets lifted on the ramp and the alignment tech said that there was no point in doing the alignment as most of the bushes were well past their best. I hadn’t noticed anything wonky on the drive home but decided that I’d just replace them all anyway as the MOT was due just after the trip and I wouldn’t have time to change them between the trip ending and the MOT. Cue a few weekends work whilst I changed the front wishbones and the rear multi-links before sending the car to a local garage to get the rear subframe bushes changed as I didn’t feel confident changing them on the drive (especially with the limited time I now had left before the start of the trip). Back to the tyre shop for an alignment with what was now practically new suspension and I’m ready for the week of driving a cheap car and hoping it wouldn’t break down.

I then drove about 800 miles in a week down to Lands End and back via 3 camp sites with no issues apart from having to top up the auto box fluid and the car not wanting to start one damp morning in Cornwall . I was also informed that it smokes a little bit when I floor the accelerator (still to be investigated). 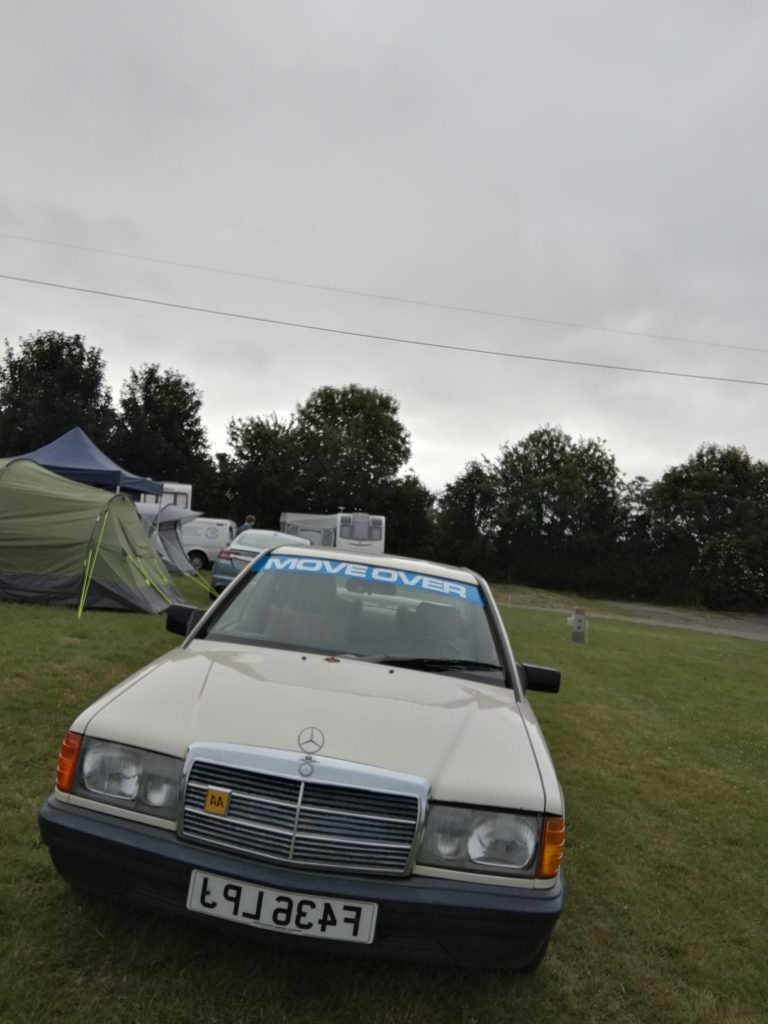 The original plan to sell the car after the trip went out of the window, partly because I knew I wasn’t going to get close to what I’d put into it and partly because I really liked the car after spending a week driving it round the South West of the country, even if some stuff still wasn’t working and it looks tatty as hell. It also means that once I’ve made it look a little better I can take both my sons to classic car shows without having to take two cars, as there’s no way that two children’s car seats fit into an MGB 🙂

The plan now is to slowly perform a rolling restoration on it, starting with the paintwork and then moving onto seeing if I can stop the smoke at startup/heavy acceleration and determine why it needs a few hundred millilitres of transmission fluid every few hundred miles… Then I can start on the rear electric windows and tidying up the interior. I’ll also raise the ride height (especially at the front) a bit with some new springs as it’s obviously been lowered in the past (by more than I’m happy with). The difficult starting problem re-occurred after the trip and was traced to a faulty spark plug which had caused the rotor to burn out, so a new distributor cap, rotor and spark plugs were installed.

This will never be a show queen car but hopefully it’ll be a nice reliable car that’s presentable enough to go to classic car shows in without it costing me a fortune to do up.